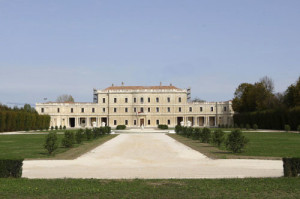 Writing about the past has made me think more about that glorious time in 1985 when I was Queen for a Day. I won a prize in the Third Venice Biennale of Architecture for a set of weavings based on the Villa Farsetti in Santa Maria di Sala. A heady time: my career was just getting off the ground then, and the publicity from the prize was extraordinary and rocketed me into the next level of notariety. 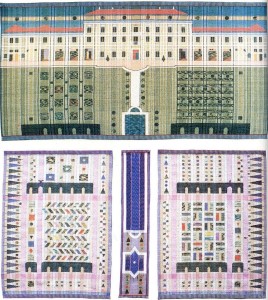 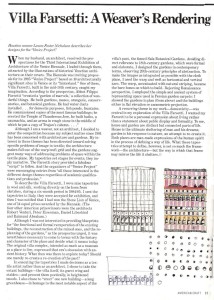 I entered the competition because my husband Ben Nicholson (who has now participated in the Biennale 3 times!) was deeply involved in his own projects (at the urging of his former teacher, Daniel Libeskind, who had been invited to participate) and he thought it would fit my interests as well. I had been making weavings which were exploring gardens & architecture as subject matter, and so the idea of making a set of weavings like a set of architectural plans, about a specific place appealed greatly to me. It gave me a new method of working too, which held for many years, making cycles of work about historic places, usually with gardens, and working from plan overview into intimate detail as a kind of storytelling.

There were 9 tapestries, including the 4 shown here of the front gardens & reflecting pool; a guest wing; a green house (see earlier post); hedgerows; stables; more gardens.

The magazine article is from American Craft Magazine, Feb/March 1986, published at the time of the birth of my son, William, who is getting his BFA from School of the Art Institute of Chicago on May 16!

Last year I had the odd experience of bidding on one of my older tapestries at auction. I let the other guy win. Lately I found that the other guy (gal? don’t know the identity!) has gallantly offered the work to the Racine Art Museum, a longtime supporter of mine (I sell ribbons in their shop, too!). It is still working its way through the accessions process but they told me it is safe to add it to the resume. 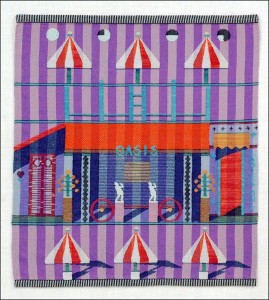 The piece is from the 1980’s, from a series about a wonderful folk art environment in Houston (where I lived for several years), called The Orange Show. It is worth a visit. 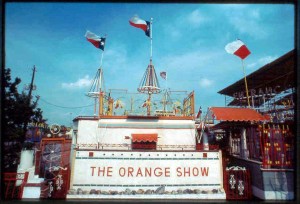 These tapestries came on the heels of my Italian-villa series that I sent to the Venice Bienale of Architecture in 1985, and were as different from the Tuscan theme as they could be. Sadly, most of the Orange Show pieces died in a fire at Van Straaten Gallery in 1989 in Chicago (the great gallery fire!) but this one made it out alive beforehand and now has made its way north to Racine.

(The tapestry shown here is a detail of “Villa Farsetti: The Greenhouse #1″, which is in a private collection in Houston. Great piece, approx 10″ tall x 110” across. The beginnings of thinking about ribbon as an art fo