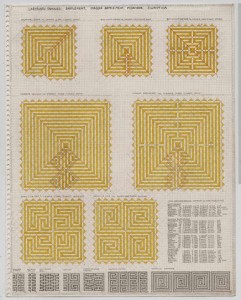 I have never pretended tp be a quilter — last quilts I made were in high school out of dressmaking scraps. They were pieced simply of squares but the colors were carefully chosen. I made one of pale fabrics, one of blue fabrics, one of red fabrics, then I learned to weave and never devoted much time to quilting again.

However I did leap forward last fall when it was announced that the annual Labyrinth Society Gathering would be held here in New Harmony (and that my husband Ben, and his sister Cordelia Rose, would be co-chairs of the event) and suggested that a community quilt be made from one of Ben’s square labyrinth drawings (see the page from his most fabulous sketchbook, above).

It seemed straightforward enough: I imagined a strip-pieced quilt with a few right angle turns. So I proposed it as a silent auction item and we invited the membership of TLS to come forward and help make it. 14 quilters + myself + Cordelia (who had not sewn since the 1970s, presumably when she left her position assisting in the Textile Department at the V&A — now there’s a recommendation!), have each received a section to make. Ben since converted the process into an intellectually simple, but physically somewhat challenging, method of using one, diagonally striped, square to piece the entire quilt. Elegant in its thought, but a bit tricky in execution as it makes nearly all seams on the bias.

I chose some fabulous fabrics from one of my favorite websites (www.contemporarycloth.com)
and after Ben had an architecture student draft the pattern, I cut the fabric up and sent it out. The blocks are beginnign to come back. They are gorgeous. Cordelia got together with her friend Sam Stineburg last week (an expert quilter who has tested the pattern for us and given us priceless advice) and she triumphantly wrote that their blocks are in the mail to me and here are photos of their process. Thanks to all of you quilters who are helping us achieve this! 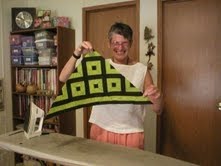 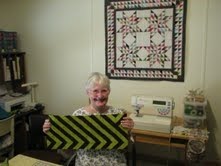