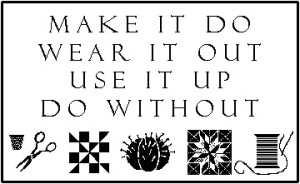 I have been reading a modest little volume called “The American Frugal Housewife, by Mrs. Child, dated 1832, and dedicated to “those who are not ashamed of Economy”.  Can you imagine!  not so long ago frugality was looked down upon most witheringly, even by those of us who probably would have benefited by sticking with it.

I have always been interested in frugality.  Raised by exceedlingly thrifty parents who had themselves grown up during the Great Depression, thrift — we called it being economical — was a survival mode, without which one certainly could not get ahead, and the idea of educating 4 girls without saving every available penny was my mother’s great gift to myself and my sisters.  My friends at my upscale school — and plenty of girls who were decidedly not friends — mocked my home made clothes.  I longed for store-bought, but even so I desired a sewing machine as my high school graduation gift rather than the usual typewriter.  Am I dating myself here?  I finished high school during the revolutionary period of the early 70s when so very many borders were crossed and customs thrown aside our heads were spinning.  Most girls hardly knew what to think about just about everything but it didn’t stop us from charging ahead and having a fantastic time experimenting with many things that had been out of reach for girls just 5 years older than ourselves.

Thrift. Sewing.  Mending.  DIY.  All derogatory terms in those days.  Sewing & cooking tied women to the old ways we were too smart to kowtow to.  Thrift?  as the 80’s barreled in, and Reaganomics took hold,  the idea of  money as a brand new kind of thing that raised all boats — we thought — even those of the artists.  I began a successful career making art and selling it — easy!  starving artist? moi?

I made a number of knitted sachets in the 80’s and early 90’s, with virtuous words knitted in: Patience. Caution.  Forbearance.  Thrift.  I showed them to a couple of friends who had rather more money than we did.  The husband was Belgian, not perfectly comfortable in his English:  “What does Thrift mean?”
His wife responded in her offhand way, “you know, like being cheap”.  Cheap.  That hurt!

For I had been raised to consider thrift a virtue.  Hear Mrs Child’s first sentence in her Frugal Housewife:

“The true economy of housekeeping is simply the art of gathering up all the fragments, so that nothing be lost.  I mean fragments of time, as well as materials.  Nothing should be thrown away so long as it is possible to make any use of it, however trifling that use may be; and whatever be the size of a family, every member should be employed in earning or saving money.”

Whoa! How many bells does that ring for you?  And yet, what a lot of sense it makes.  Green.  Eco. Cradle to Cradle.  And OK, maybe child labor — or at least encouraging one’s children to contribute to the well-being of the whole family.  Old fashioned or revolutionary?

1 thought on “The Frugal Housewife”