I am working on another large figurative tapestry. I should point out here that before last fall, when I began this current series, the last figurative piece I wove was in approximately 1974 when I was ridiculed at Kansas City Art Institute for using textile to depict something which should be painted.  This was the era of fiber for fiber’s sake, large expressive textural and NON-OBJECTIVE weavings were de rigeur.

I spent my time at Cranbrook Academy of Art, working on my MFA in Fiber, trying to justify weaving at all, making sure that my subject matter had a direct relationship with the means of execution.  I spent years making tapestries of garden and architectural subjects, both of which used the woven grid as a common language.  Pattern, grid and surface texture were the language of textiles I became most fluent in.

So last fall when I conceived this body of work I was so aware of this old argument in my head.  I set out to make weavings where the thread was as important as the image; the overall simplicity and bluntness of the compositions and spatial relationships were consistent, I felt, with my woven directive of producing textiles which need to be textiles, not paintings.  The most difficult piece to date was last spring’s “In My Mind’s Eye I am Fine” a nearly full size woven silhouette of a figure.  It was nerve wracking to weave, row by row, bottom to top, as I worried continually about how I could control the form, how expressive my lines might be, whether my lack of skill in rendering this form would become a part of the expression.  It took me months, as worry is the thing that slows me down the most.

I am now nearly done with the next step in that battle.  A few months ago a close friend related her dream to me: that she saw me lying on a bier, as if dead, but I was weeping continuously and smiling.  I was also wearing a fabulous suzani dress, as it happened (my friend is a textile person too).  What an image!  I set about immediately making the warp for  this piece, made scale drawings, threaded the loom, embarked on the project.

First issue: was I going to weave the suzani flowers?  Was this about making my own suzani? (very appealing! but I was concerned it would not do justice to the embroidered reference)  Or was it about the narrative?  Would making an awkwardly woven suzani distract from the real story, the smiling-and-weeping self?  I saw this story as my next step: I am sad but I am fine!  So the flowers were left behind.

Then there was the form itself.  More difficult hands! that stopped me for weeks.  Got them done and then unrolled and saw a comically distorted body.  That threatened to stop the project, but I finally sat down, made a full scale drawing, and got back on the horse.  And today’s work, at last, is to weave the very important smile.  One might have noted, my earlier heads have had ears but no faces.  Here we go.  So it is woven, she is my Mona Lisa with, I hope, an ambiguous smile.   I took a break to write this, and now I am off to weave the top of her head. 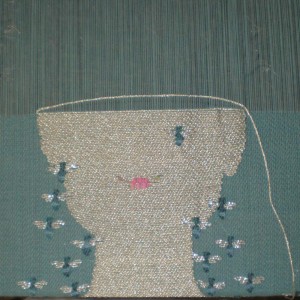 2 thoughts on “how to weave a smile”