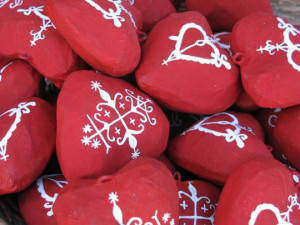 I am in Santa Fe New Mexico this morning, having come here with my friend Docey Lewis.  She is deeply involved with Haitian artisans, many of whom have lost the workshops she helped them to establish over the years, so Hand/Eye Fund (related to the sumptuous Hand/Eye Magazine, which you absolutely MUST subscribe to if you love textiles and fine crafts from around the world) is sponsoring A Million Hearts for Haiti to raise needed money for rebuilding.

Santa Fe has grown so much over the years — as everyone comments upon — that the hustle & bustle seem comparable to New York to me after the peacefulness of my home in New Harmony.  Fun and stimulating for a few days, but I am ready to quiet down again. 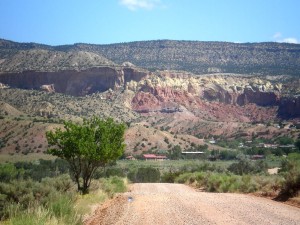 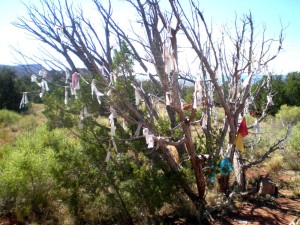 l, who are doing their annual 3 week spiritual residency at Casa del Sol there.  The tranquility and sheer beauty of the region were unsurpassed.  We have had long conversations about the importance of place — both New Harmony and Abiquiu are “thin” places where one is closer to God (or if you prefer, to your own center).  Docey and  I were so struck that we have begun making plans to get back there for a retreat ASAP. 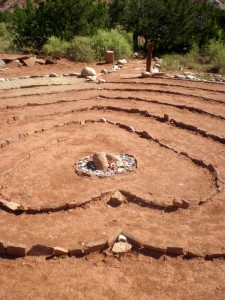 I have written several times about labyrinths in this space so it seems fitting to show you the simple heart labyrinth that has been made at Casa del Sol.  And above that, a lovely prayer tree next to the labyrinth where prayers are written on strips of cloth and tied to the branches of the tree to be whispered to the passing winds.  Below, the heart stone at the center of the labyrinth. 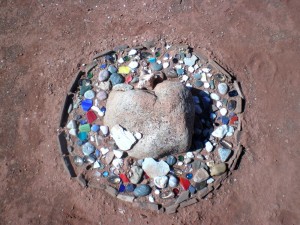 Tonight we move along to Albuquerque to spend the night at Los Poblanos Inn, an organic lavender farm with a bed and breakfast.  Should be heaven.  More soon!. 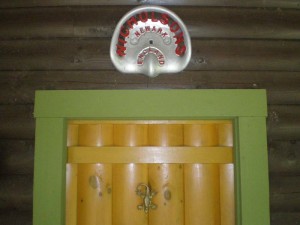 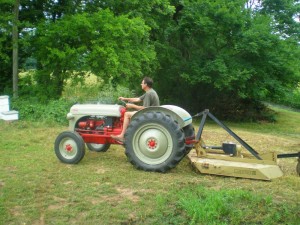 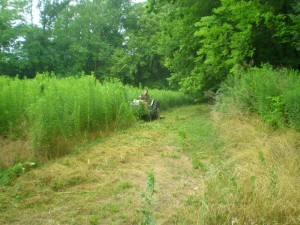 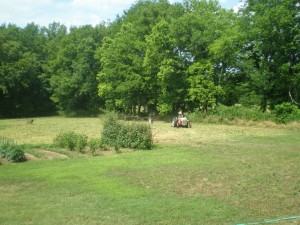 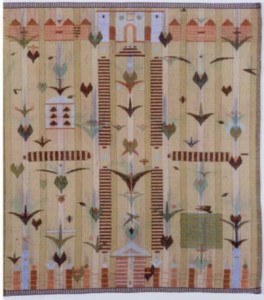 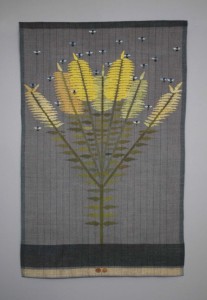 I spent this quiet, cold, snowy day washing, pressing and hemming the last tapestry from fall. I have always loved goldenrod; I made a dye from it when I was at Cranbrook long ago (the last time I fussed with natural dyes) which made the most memorable, vibrant yellow I have ever used. I also made a pale yellow with it. Two tapestries resulted from that dyebath: Angel’s Walk, with the pale yellow, and Ornamental Garden, with the thrilling yellow. Sadly, the latter yellow has lost its thrill over the years and has faded. As this piece belongs to an important mentor of mine, Gerhardt Knodel, I will no doubt re-weave it for him. I am actually looking forward to that process — imagine re-making as carefully as possible something one made 30 years ago! That was a time of radiant discovery in my artwork: I wonder if the re-making would stir that sense again.

This current goldenrod tapestry came out of a startled observation one day as to how it grew. Having plucked if over & over for years, made dye from it, and thought about its color, I had never actually looked at how it grows — which is vaselike, originating from a single stem and branching out. Between the sturcture and the color I had to weave it. 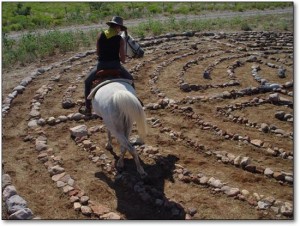 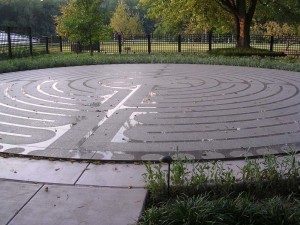 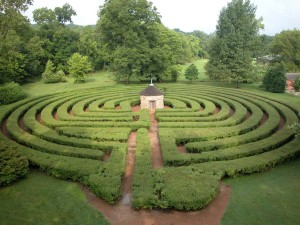 It it exciting to report that the Labyrinth Society of America (TLS) has decided to hold its 2010 Annual Gathering here in New Harmony, Indiana. It wasn’t a hard sell — New Harmony has 2 labyrinths which attract thousands of visitors, and my husband, Ben Nicholson, is a well-known labyrinth expert, and also an expert persuader. He just returned from the 2009 TLS annual Gathering in Portland, OR, full of ideas and anticipation for next year.

We have already hatched plans for making equine labyrinths, guided by Ben’s sister Cordelia Rose, of Whitewater Mesa labyrinths in Glenwood NM. Cordelia has built several labyrinths out on her land and trains horses to walk them, something which both increases the animal’s agility and calms him. She came out here in August and worked with a number of horse owners to convince them to participate with their horses in the TLS gathering next year.

Ben is excited about making new, temporary labyrinths all over town, including the dirt “shuffle labyrinth” he keeps cleared at the back of our land. 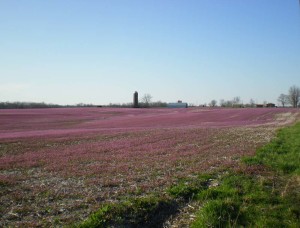 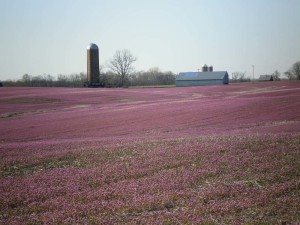 It has been a while since I posted here; my weaving work has been curtailed a bit by what I suppose must come down to a frame of mind that simply has not been present enough to make good work. When I used to teach, I would rail against the idea of inspiration; Thomas Edison’s comment about success consisting of 10% inspiration and 90% perspiration needs to be reinforced when one is beginning the practice of studio discipline. I have usually found that the way out of a block is simply to start making something and while the hands became active, the mind will begin to work in its old creative pattern again. My recent history would indicate that the 90% perspiration is useless without the initial 10% of inspiration.

But getting out the the studio can provide a jolt of, yes, inspiration. Last week a number of fallow fields in the area were shockingly PURPLE with a weed called dead nettle. It is scraggly and you would never want it in a bouquet, but masses of it seen from a distance blurs to intense purple for a short period. My friend Sally who knows everything about plants says it is dead nettle — dead meaning that it doesn’t sting — and I have also been told that it grows particularly well in fields where the other weeds have been killed off by RoundUp. Yikes. Anyway, an amazing sight! 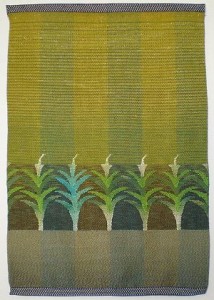 I am always grateful that people actually buy my tapestries. This amazing act of faith has enabled me to continue my life as a studio artist for over 30 years. Can you imagine how lucky I feel! And though the times ahead are perilous, I have weathered recessions before and hope to manage again this time.

Therefore I was astounded & delighted the other day to receive a note, via my etsy site, from a woman who had tracked down my tapestries and bought one from one Patina Gallery, and then, amazingly, a second from Telluride Gallery. Thank you, Angelique! You are indeed an angel. 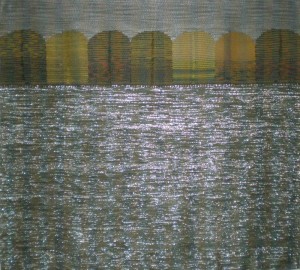 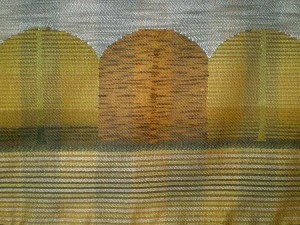 November was always a month I dreaded. While I lived in Chicago it was that dull grey space in between the beauty of fall and the reality of the coming hard winter. Cold, chilly, colorless.

But here in southern Indiana I find this time of year quite beautiful: the air, though cool, is refreshing, and the colors fascinatingly subtle.

Here are a couple of recently woven pieces. I have just sent Treeline, November to Hibberd McGrath Gallery for their winter show. 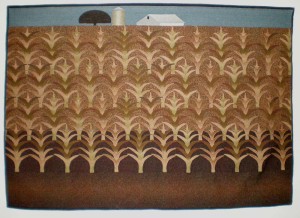 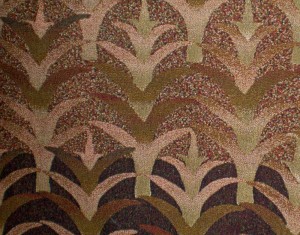 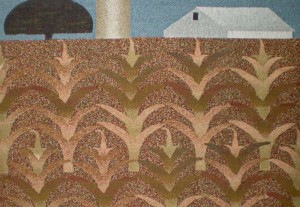 Last fall I began a hand weaving of the dried corn ready for harvest. Somehow the scale — 55″ across, full of detail — daunted me and I never finished it. This spring, while beginning to make image files for the new jacquards, I decided to make use of the scale & detail of the jacquard loom and imagine the tapestry as I had meant to weave it by hand. The color was a challenge for the mill, reddish golden stalks, but the weaving arrived today and I am delighted. And the scale is majestic: 54″ high x 80″ across! 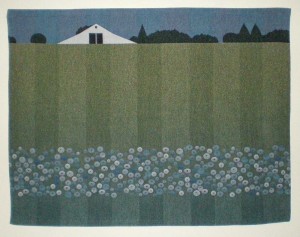 To follow up on the last post about weaving this tapestry to get the correct color, I received the next strikeoff of Chicory the other day, and the color is much improved, though the weaves are not yet finalized. In the first version, the weaves had more dimension and the chicory flowers nearly popped off the ground.

The weave designer told me that she will continue working to get the depth in the weaves and the colors correct. This was woven on a warp with a brighter base set of colors.