I love vegetables — I love to eat them, I love to grow them, I love to draw them. When I first saw the vegetable garden at Monticello, first designed by Thomas Jefferson in the late 18th century, restored under Peter Hatch at Monticello in the 1980s, I was mesmerized by its beauty and its long, ribbon-like proportions. At about 80 fet wide by a thousand feet long, it seemed like a giant, patterned textile just unfurled from the loom. So I set about making a series of tapestries trying to describe the scope of the garden, from seed-sprouting and seed saving, through a woven catalogue of dozens of vegetables planted there. 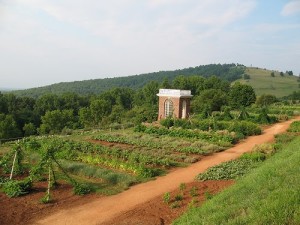 the vegetable garden at Monticello 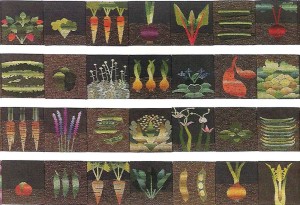 This last piece, “Harvest 1992” (1992 was the planting year I referenced, it was woven in 1993) became a lexicon for me of woven form which I have referred to over and over again ever since. Long after the tapestries had been exhibited and sold, I designed a ribbon with some of the vegetables which we still produce’ Crate & barrel licensed that design for kitchen towels for several seasons too. And most recently I was contacted by The Battery Park Conservancy, who have now licensed the design for use in fund raising efforts for their Urban Garden, due to open this spring.

From their website,
“The Battery Conservancy presents the first Urban Farm at the Battery since the Dutch planted their cottage gardens in New Amsterdam in 1625.
This innovative project began with a request from students of Millennium
High School’s Environmental Club to plant a vegetable garden in the park.
Saying YES launched a farming initiative that now includes EIGHT schools with over 450 students (K-12).
The Battery Conservancy is expanding the program to include community groups, residents, and the neighboring workforce who long to give their hands and hearts to cultivating and harvesting home-grown food.” How cool is that ?